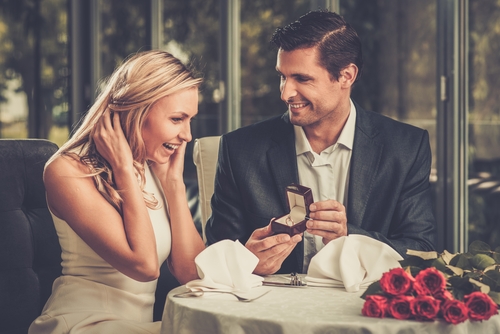 Though it is hard to imagine a time when diamond engagement rings were not the norm, with over 80% of American brides receive a diamond engagement ring. So, what is the history behind those gorgeous rings? Let’s set the traditional scene, a man, maybe on one knee, presents his prospective bride with an engagement ring as he proposes to her. Those who study the past, anthropologists, have believed that this tradition originated from a Roman custom. In this tradition, wives wore rings attached to small keys, indicating their husbands’ ownership.

Diamonds have been around for hundreds of millions of years. They were formed under very specific conditions such as extremely high temperature and pressure levels and in depths reaching up to 190 kilometers. The first discovery was believed to be in India about 3,000 years ago. Today, India is one of the largest diamond industries. In 327 BC, Alexander the Great brought the first diamonds to Europe, and years later diamonds were used as decorative gems. Now, the year is 1477, Archduke Maximillian of Austria is commissioned the very first diamond engagement ring on record for his betrothed, Mary of Burgundy. Since then, a trend for diamond rings among European aristocracy and nobility began. The romantic Victorians commercialized ornate engagement ring designs that mixed diamonds with precious metals and enamels. These rings were crafted in the shapes of flowers and were known as posey rings. Then diamond rings were crafted during the Edwardian era continuing the tradition of pairing diamonds with other jewels.

Later, everything changed in 1880, when Cecil Rhodes founded the DeBeers Mining Company with other investors. By 1890, they controlled 90% of the world’s diamond production and turned diamond engagement rings into nothing more than an ad campaign. In the 1930s, the demand for diamond rings declined in the U.S. because of hard economic times. The De Beers Company began an aggressive marketing campaign using photographs of glamorous movie stars swathed in diamonds. Once the Great Depression ended, in 1947 the company’s ad agency N.W. Ayer & Son launched its famous “A diamond is forever” slogan. Hence, the implied durability of a diamond conveying the message to Americans that marriage is forever was established.

The company began to encourage men to spend two months’ salary on the diamond engagement ring. The sales of diamonds increased by 50% within three years.

By the early 1940s, engagement rings become the leading line of jewelry in most department stores. With the higher demand, DeBeers opened more mines in Africa. Diamonds now symbolize the celebration of a union. Diamonds have now become symbols of the depth of a man’s commitment to the woman he loves in many corners of the world. Through decades, the most popular cut for diamond engagement rings has always been the round brilliant, consisting of 58 facets that divide the stone into a top and bottom half. Now, the princess cut, the emerald cut and the oval cut, and even the halo, with the cushion cut have quickly gained popularity as a recent trend.

The term diamond comes from the Greek word Adámas, meaning “unbreakable” or “untamed,” derived from their durability. Elite Jewelers, located in Plano and Richardson, Texas, is a jewelry store with the perfect diamond ring for every occasion.